When I began writing this blog, I had not intended for there to be quite so much focus on shoes! However, whether coincidentally or not, they keep popping up in the media for all sorts of reasons. Yesterday, June 19 2015, was apparently National Flip Flop Day in the US, brought to you by Tropical Smoothie Cafe. The goal appears to be heralding the start of summer and raising money for a worthy cause, but for all the reasons mentioned in a previous post, I recommend giving the flip-flops a miss – even at $1 a pop from Old Navy, although these tweets on the offer raised a smile! And if you are still wearing them, here are some suggestions for must-do stretches to help keep your feet and body healthy.
At the other end of the shoe spectrum, the negative impact on the body from wearing high heels continues to raise concerns. My daily email from the Health Freedom Alliance featured yet another article about problems associated with wearing heels, but includes advice on how to do so with a little less harm to the body. Also in the news today, a report based on research presented to the Royal College of Surgeons of Edinburgh that an alarming rise in the number of women with nerve damage and foot pain is likely due to high heels.
On an altogether different note, there are currently no less than three exhibitions running in London this summer where the focus is on shoes, the most prominent one at the V&A Museum began June 13 and is entitled The V&A’s Shoes: Pain and Pleasure. This interesting article in The Guardian highlights the exhibitions and examines some of the reasons behind our continuing obsession with the shoe, and looks at how our choice of footwear affects the way we are perceived by others. And in case you were thinking that this is a female preoccupation, British hand-made MEN’S shoe manufacturers are reporting an increase in sales to the point where they can hardly keep up with demand. 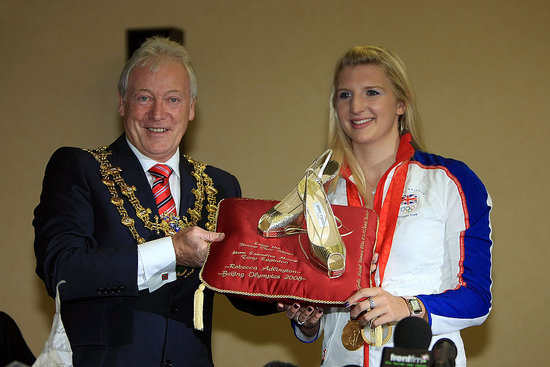 Finally, I was listening to one of my favorite BBC podcasts this morning, the long-running radio interview show’ Desert Island Discs‘, in which Olympic champion Rebecca Adlington described how much she loves high heeled shoes and that she was presented with gold Jimmy Choos by her home town mayor after her world record wining performance. At least if Rebecca continues to spend a lot of time at the swimming pool, she won’t be wearing her high heels long enough to do too much damage to her feet nor her healthy, super-fit body!