When I was taking my reflexology practitioner training course, I needed a lot of volunteers for my documented sessions. I remember asking in an unrelated class if anyone would like to receive a free reflexology session in order for me to complete my requirements and to gain the practice I needed. The general response was, “Reflexology – what’s that? I’ve never heard of it!” That was over twelve years ago and I am happy to report not only is that question far less likely, references to reflexology have become increasingly mainstream. In the last few weeks, two items in the media have caught my eye. This article relates the rags-to-riches tale of a successful business woman, who ulitmately found that her financial wealth did not bring her happiness, and mentions almost in passing that her profession was reflexology, without any further explanation of it needed.

In addition, the following cartoon appeared in the March 21, 2016 edition of The New Yorker magazine: 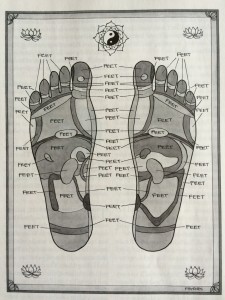 While the cartoon is intended to be disparaging, I not only found it funny, I was delighted that it wasn’t even labeled as ‘reflexology’, the cartoonist presumably concluding that readers would get the joke without one. So what if the message is intended to dismiss the premise, the very fact that the cartoon is in print in a mainstream publication tells me that there has to be substantial level of recognition of the practice. That is a big step forward and certainly something to smile about.