After a post about all about listening, what else could I be thinking about this week other than ear reflexology? I miss both giving and receiving reflexology sessions very much, but they are typically on the feet and working on points on the feet as self-help is useful but not necessarily easy to do. I often work the reflexology points on my hands, but while beneficial in many ways, I don’t find it particularly relaxing to do so, other than the couple of points/holds I mentioned previously. Ear reflexology, however is a different story and I have noticed that my ‘zoom’ meditation teacher sometimes incorporates self-ear massage as a way to induce the relaxation response and to prime students for the focus needed to meditate. Children and babies often self-soothe by rubbing their ears, knowing instinctively that they can relieve stress by stimulating the ear pressure points. Gently working the points on the ears can trigger many responses:

Many of us may already benefit from ear massage without being consciously aware of it. It is not uncommon for someone to pull on, rub or fiddle with the ears when anxious or when concentrating as it is a natural way to soothe and calm. There is a high concentration of nerve endings all around the ears, in addition to acupressure points, marma points (in the Aryuvedic tradition) and

But you really don’t need to understand why exactly ear massage is so beneficial to reap the benefits – rubbing, tugging, pulling, pressing and rolling the ear cartilage and lobes all produce calming effects, and you can experiment with what feels good: hard, soft, with or without oils, all over or just one part such as the lobes or the outer edges of the cartilage. Reflexologists believe that the whole body is reflected on each ear, so just by working on this one area of the body we can impact the whole. If you wish to explore offering support to specific areas of the body, this is a useful graphic followed by a few suggestions to try out. In all cases go slowly and deliberately paying attention to the sensations. 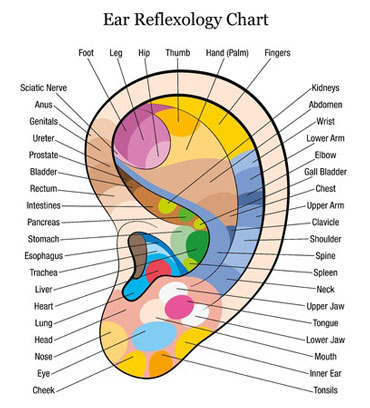 Rubbing the outer edges of the ear

Hold the top of the ear between the forefinger and thumb, rub the finger back and forth as you work your way down the edge of the ear. Rubbing stimulates the ear nerve endings and will increase blood flow to the area, bringing blood to the head and making you feel more alert and awake.

For relaxing ear pulling, you can start either at the top of the ear or at the lobe. Placing the ear cartilage between the thumb and forefinger, gently hold the ear and pull it outward away from your head, letting the ear slide through your fingers until it is released. Take care to reach all the way to the spot behind the ear where the ear attaches to the side of your head before gently pulling away. This part behind your ear is particularly sensitive since it is not often touched. Work your way all around the ear and back for a wonderful stress relieving move which you will likely feel through the body.

The centre of the earlobe, the spot at which a piercing is typically placed, is known as a master point for stimulating the senses. Hold this point between thumb and forefinger and rotate firmly but gently. You can also pinch all around the area of the ear lobe, paying attention to anywhere that feels sensitive.

This part of the ear as mentioned earlier has a slightly heightened sensitivity due to the concentration of nerve endings and since it is touched infrequently. The skin behind the ear is also not as tough as other parts of the body, since this area is protected by the ear itself and this too makes it more sensitive. Gently stroking the whole area behind the ears, where they meet the skull can be extremely pleasant, soothing and calming to the body. This is an excellent technique to use at bedtime to encourage deep and restful sleep.

Hope you enjoy trying out these techniques. It’s really impossible to go wrong if it feels good, but if you want more guidance try following along with this helpful video.